Investigators with Arapahoe County Sheriff’s Office are asking for help finding the person, or people, who fired gunshots into multiple homes in Centennial, the agency announced in a news release Sept. 20.

Around 8:30 p.m. on Sept. 18, dispatchers received reports from multiple callers about shots being fired near East Progress Circle and South Flanders Court in Centennial, according to the release. There were no injuries.

One caller reported hearing five shots being fired and “then a vehicle take-off at a high rate of speed while firing five more shots,” the release said.

“Because the boy was playing a video game, he was leaning forward and missed the bullet by just a few inches,” the release said. 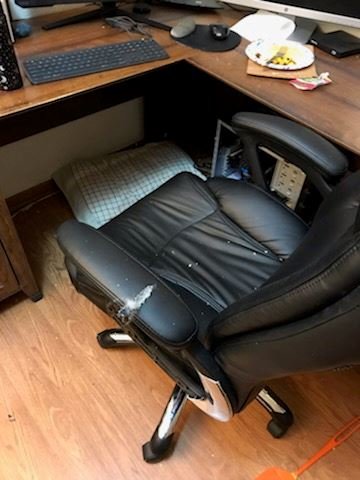 Image of the chair that was hit by a bullet, according to a news release from the Arapahoe County Sheriff's Office.

Another home on the same block was struck by a bullet that went through the master bathroom window into the shower, according to the release.

On the 5300 block of South Dunkirk Way, a bullet went through the back wall of a house and hit a microwave in the kitchen.

According to the release, deputies located multiple shell casings in the area. The investigation is ongoing.

“The suspect vehicles are described as a black Mustang or Dodge with a loud exhaust and a black BMW 4-door sedan,” the release said. “Investigators are asking residents who live in the area to please check your doorbell and/or surveillance cameras for any vehicles in the area during that time.”

Those who may have any information about this incident can contact the agency’s investigations tipline by calling (720) 874-8477.

Orediggers take down Gators, Tigers in back-to-back home duals
After serving as a TA for a laser physics class and doing a few hours of research for his doctorate program in quantum physics, Jack Damenti headed to Volk Gym to make weight and compete in two 165-pound matches for the Colorado School of Mines wrestling team.